Today’s topic was requested by Oksana, who reports she gets anxious after reading our posts because with each read her desire to visit Italy increases.  Oksana asked “Do Italians welcome visitors and what are the some of the unique cultural norms?”  While I had never considered this as a topic as I began thinking about our recent visits, I realized Italy is a country rich in culture and they don’t have any intentions of changing anything because you showed up.  Allow me to touch on my observations while weaving in a few other details.

Language: Italians do not care where you are from, they are speaking Italian and it’s your responsibility to figure out what they are saying.  One caveat, in the larger cities (Rome, Florence, Venice) most of the hotels will have English-speaking staff at the front desk. However as you move out of the cities and into the countryside the amount of English quickly drops.  Quick story: On our second trip to our village I was greeted by an older woman who was holding an envelope with my name on it.  She hands me the envelope while saying something in Italian and waving me to follow her.  We walk up the main road and now she is waving me into her house.  Her husband is sitting at the table and she continues to speak to me in Italian and I don’t understand a single word.  I am smiling, nodding and hoping to pick up a word or two…nothing!  The only thing I know is that she is asking me a question and I say “Yes”.  Next thing you know she is pulling out a kettle and filling it with water.  I politely decline her offer to make me an espresso and exit with the envelope.  On the walk back to our house I realized we held our entire conversation with hand motions and facial language.  Aleth and I are trying to learn Italian via Rosetta Stone and we have a long way to go.  Oh yeah, the envelope contained an RFID card that allows us to open the garbage, recycling and composting bins in our village so they can keep track and bill each person the correct amount.  Currently trash seems to be the most innovative industry in Italy.  My two cents on language, learn the basics before you go because that effort will be greatly appreciated.

Greetings:  Buon giorno! ( Hello, Good morning), Buona sera! ( Hello, Good evening)
Buona notte! ( Good night), and Arrivederci! ( Goodbye! ).  I recently read that “Ciao” is considered very informal and is typically only be used by close friends; however my observations and interactions have not demonstrated that so play that one by ear.  It is common for friends, family and even acquaintances to greet each other by a kiss on the left and right cheek (not sure if it’s left then right or right then left).  Don’t kiss someone you have never met before!  Even the men will often embrace with a hug.  Italians are a close-knit society, incredibly loyal to one another and are not afraid to publicly demonstrate it. Business meetings typically begin and end with a handshake.

Dress Code:  It seems Italians are born with a sense of elegance and style because they are usually very well dressed. I have not asked anyone, but I’m sure they consider Americans in their t-shirts and jeans as sloppy and lacking self-respect.

It is said that Italians dress nicely to indicate their social status, family’s background, and education level.  It is called ‘bella figura’ or good image and it is very important in this culture.  I wouldn’t consider their style to be overly formal, but they clearly put effort into the selection of clothes even for the simplest of tasks like running errands or a day trip to another town.  Leave the flip-flops, short shorts and bathing suits at the beach as wearing these to a restaurant or shop is considered to be poor taste.  When visiting churches you should be conservative in your style of dress.  Exposed shoulders are a no-no and short skirts will likely have a Vatican City official asking you to cover up or leave.  My take-away here is that Italians take pride in their appearance and we could learn a thing or two from this approach; however I still love my flip-flops.

Religion:  The primary religion in Italy is Roman Catholic (88%) with the next closest group described as “no religion” at 6%.  There are more Catholic churches per capita in Italy than in any other country in the world.  Attendance at church is in decline but the influence of the church is extremely strong throughout Italy.  Nearly every building has some evidence of Catholicism with a crucifixion built into the architecture or a religious statue in the lobby.  Despite your personal religion, I would suggest you are respectful of the church in Italy as it is an integral component of their culture.  Few other tips: do not bring food into a church, silence your cell phone and throw that water bottle away before entering.

Restaurants:  As I mentioned above, Italians will be dressed nicely for everyday functions so plan accordingly when going to a restaurant.  My experiences when dining out in Italy further demonstrates how close families remain in this culture as you will often see mom, dad, children grandparents and cousins enjoying numerous family-sized pasta dishes and entrees.  They don’t motion for their waiter from across the room and surprisingly speak in quite tones, not like Italians are often portrayed in our television shows as loud and boisterous. 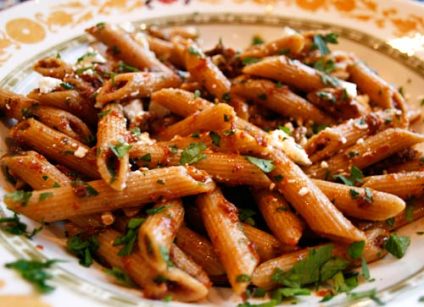 You are not required to order an antipasto, primi, and secondi but any combination of two is considered a normal meal format. On our first trip we thought we had to order all three courses until dinner with Paul and Aine (who care for our house) and they showed us how to correctly order enough food for everyone while not stuffing yourself. Lunch in Italy is considered the largest and most important meal of the day. Spaghetti and meatballs does not exist as a dish, but you can order them separately. If you want to announce to everyone that you are a tourist order a cappuccino after breakfast hours and your waiter will give you a dirty look as the cream is considered too filling.  Most restaurants close after lunchtime from 2pm-4 or 5pm, this is NOT called “siesta”, they are simply closed.  You must ask for your check (il conto per favore) as it is considered rude (rushing you) if the waiter were to bring it without being requested.  So it may seem like there are a lot of rules here, the reality is that eating in Italy is a true treat and should be enjoyed.  Hoping these little tips help you avoid potential embarrassment.

Welcome?  I know Oksana’s original question asked if Italians are welcoming of other cultures and secretly I think she was asking “would they welcome a Russian woman from San Francisco?”  I honestly can only answer that question from my personal experiences and I have not witnessed anyone treat me or Aleth poorly because we don’t speak the language, prefer jeans over Euro slim fit dress pants and still like a cappuccino in the afternoon.  I’m sure the experience will be different for everyone and will vary between large tourist-filled cities and small rural towns.  Oksana, I’d encourage you to visit Italy and find out for yourself.  Ciao!

Hi, thanks for checking out my blog. View all posts by Brendan